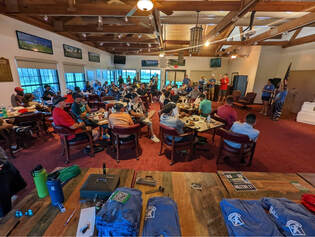 MacDill Run & Golf Tournament
Sponsored by the 6th Security Forces Squadron
As always, the 6th SFS puts forth a great event...despite some challenging weather!
Many thanks to everyone, including Lt. Helton's family and friends, who came out to support the SFS in honor of our Fallen.  It was a particular pleasure to see a few from Det 2 and Det 3 who served with Helton in Iraq.  The 6th SFS on Facebook have many more photos to view!  The T-shirts and polos were a hit!  The t-shirts felt so nice and soft I had to go back for seconds!  Next up - Ruck in San Antonio in November! 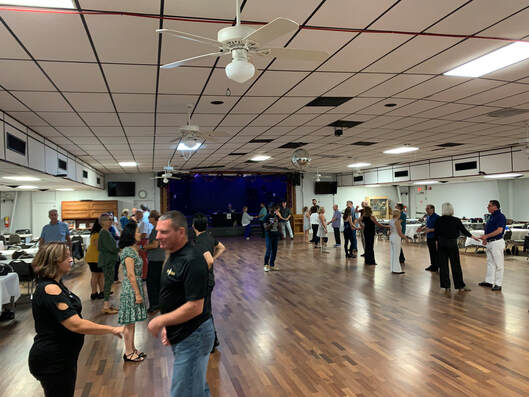 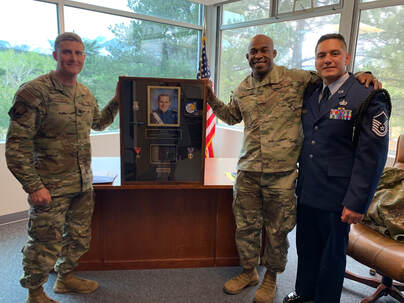 During my stay at the Academy, I visited the 10th Security Forces Squadron. Escorted there by Msgt Ramirez-Sanchez, I had the pleasure of meeting
Lt. Colonel Christopher Jackson, Squadron Commander, who had gone through Tech School with Joseph.  It was a most memorable visit, topped off by revealing  a display that will be placed inside the Building known as the Search Pit.  The Commander has an amazing view!
​ 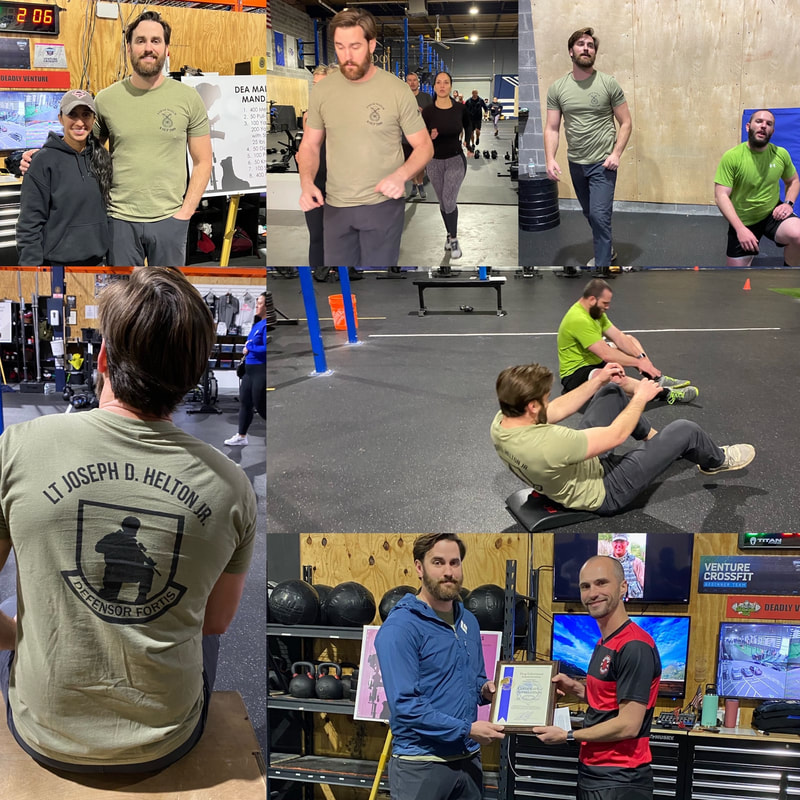 First up this year to honor Lt. Helton was the DEA's 16th Annual Maltz Challenge.  Sponsored by local DEA's, Atlanta chose Joseph to honor this year.  I had a last minute family emergency for an out of state grandson and had to leave town.


​Joseph's cousin Levi attended the event. Initially planning to be just a spectator, upon arrival he decided that Joseph would have been in the midst and not on the sidelines, so into the fray he went!

​Click here for coverage from 11Alive
The first 2022 Security Forces Officer Course graduation OF 2022 took place in April, I can't begin to describe how comforting it was to no longer look at "Kilroy" eyes above a mask, but to actually see smiling faces again!  As usual, these officers are a special breed, and give me a great deal of comfort to be in their midst.  I am always humbled to be allowed to share this moment with such a successful and motivated group, and honored to be given the privilege to present the Lt. Helton Leadership Award, this time to 2Lt Brandon Edgar. 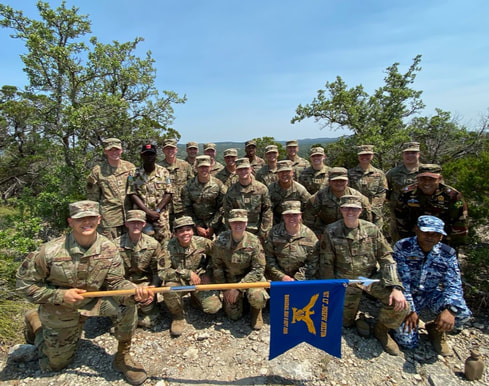 Next in April was Police Week.
The next class of SF Officers  going through the course earned their guidon.
I don't know everything they had to do, but I watched a video of them all doing push-ups -  after which I felt like I needed to take a nap.
Our Defender Nation is one special group of very capable individuals!
​I look forward to meeting them all in August.

In May the Class of 2022 graduated at the United States Air Force Academy.
The Georgia Parent's Club sponsors the Outstanding Cadet Element Leader Award for which I was honored to present Cadet Preston M. Albury.  Photo coming soon.  Thanks to C2C Kyle Patterson for being such an enjoyable escort.

During my stay at the Academy, I visited the 10th Security Forces Squadron. Escorted there by Msgt Ramirez-Sanchez, I had the pleasure of meeting
Lt. Colonel Christopher Jackson, Squadron Commander, who had gone through Tech School with Joseph.  It was a most memorable visit, topped off by revealing  a display that will be placed inside the Building known as the Search Pit.  The Commander has an amazing view! 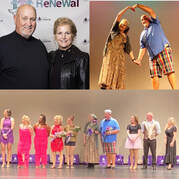 Project ReNeWal in Rockdale County raises funds for victims of domestic abuse and violence serving Madison, Rockdale, and Walton Counties.  We have assisted this organization in 2019 with their Dancing with the Stars event, which had been cancelled in 2020 and 2021 due to Covid.  I was partnered with Monroe's ex Police Chief and veteran Keith Glass to put together a dance routine for the program.  Happily, not only did the event raise a record amount for Project ReNeWal, Keith and I were awarded the People's Choice Award.  Many thanks to the contestants, organizers, and Keith Glass for this wonderful experience that was so much while raising money for such a worthy cause..

A Walton County Elementary School has been giving the Lt. Joseph D. Helton award at their end of the year awards ceremony for eleven years.  This was begun by Sean Callaghan, one of Joseph's mentors and soccer coach.  I was invited to attend the ceremony this year.  The young man who received the award gives me great hope for our future.  It was overwhelming to experience the excitement displayed every time a "candidate for the Helton Award" was mentioned as the individual's accomplishments were listed - though I am sure it was more for the accomplishments and character of the candidate and not the award itself. I was, however, very moved when the winning candidate's mother approached me in tears following her son receiving the award.  We look forward to hearing what these students accomplish in the years to come.

Alpharetta
In 2020, as a 65th birthday gift for my husband (he is so hard to buy for,) I decided to bring one of David Sarver's favorite instructors to Atlanta for a small workshop with friends, and an open evening social dance.  Covid cancelled that, and by 2021 David had turned that idea into an event.  Jeff Mumford came to town in August 2021 for a full weekend that included a 3 hour workshop, lessons, and two dances.  Profits from that were donated to both the American Legion Post 201 and Stop Soldier Suicide.  David enjoyed it so much that he has repeated it twice!  Robert Cordoba was here in December, Joel and Chantelle were here in April.  In July Jeff Mumford returns for another Saturday afternoon workshop and Saturday night dance,  Online registration is available at a reduced price through the "Mumford Workshop" link at the top of this page.
Profits from the workshops will be donated to a veteran-related organization and announced in the Fall of 2022.